The midterms handed the House to the Democrats but not the Senate, despite receiving some 12 million votes more than Republicans in Senate races. As a result, Trump’s ability to pursue his conservative agenda is largely crippled. But where he can count on the backing of the Senate, Trump retains full power, including the ability to nominate judges and pursue foreign policy. His hold on international trade and finance, notably through sanctions and tariffs, remains intact. With potentially devastating consequences.

The trade war on China is not about to stop but that is only the most visible part of the Trumpian iceberg. There are, as this article will show, other, more discreet elements buried under the surface, such as America’s grip over SWIFT, the payments transfer system universally used by banks everywhere.

We all know how Trump packed the Supreme Court with two conservative judges, most recently with Brett Kavanaugh, a highly controversial figure. What is less well known is how Trump is also “packing” the Federal court system. As of 4 November, the Senate has confirmed 29 judges for the United States Courts of Appeals, 53 judges for the United States District Courts, all nominated by Trump. In fact, according to the Pew Research Center, Trump has successfully appointed more federal appeals court judges at the same point in his tenure than Barack Obama and George W. Bush combined: 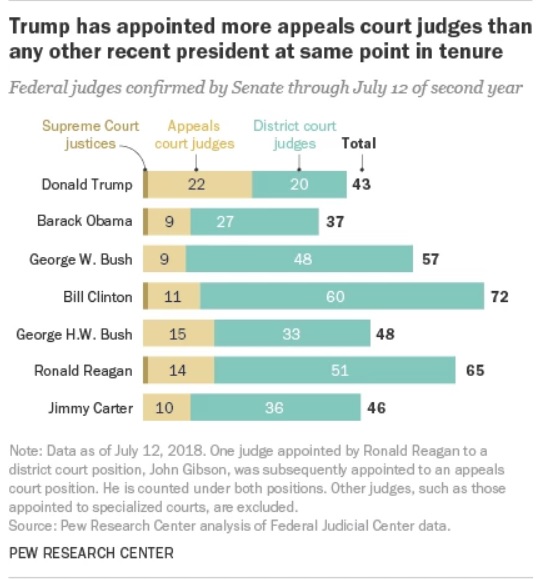 Source: Pew Research Center. (Screenshot; note data stops at July 12, 2018 and does not include the second Supreme Court appointment made by Trump)

Expect many more nominations over the next two years. Here however I am taking a close look at foreign policy, and in particular the area that has traditionally underpinned American “soft power”: international trade and finance.

Bending World Trade and Finance to the America First Agenda

Trump has now carte blanche to reshape the rules-based world trade system to serve his America First agenda – and this is something that should deeply worry America’s allies and foes alike.

This week-end Trump is in Paris for a meeting of world leaders, invited by French President Macron to celebrate the centenary of the end of World War I. A meeting that includes Putin and that is poignantly far away from the trip taken 100 years ago by President Wilson, his idealistic predecessor, bent on rebuilding the world. The reverse of Trump’s goal which is to take it apart. And he will not stop there. Trump is scheduled to attend in November the G20 meeting (China will be there). Expect fireworks.

Will Trump change his confrontational approach to American allies, especially Europeans? Not likely. So far, he has loudly pulled out of numerous treaties (the Trans-Pacific Partnership with Asia and the equivalent treaty with Europe, the Paris Climate Agreement, the Iran nuclear agreement). Recently he has announced he will abandon the Intermediate-Range Nuclear Forces Treaty signed with Russia by Reagan; he threatens sanctions against the International Criminal Court and is pulling out of an 144 year-old postal treaty as part of his fight against China. He has repeatedly cheered Brexit, attacked NATO partners and declared that the “European Union is a foe”.

At the heart of Trump’s “art of the deal” are bullying tactics, plain and simple. And in a perverse way, they make sense.

The Strategy Behind Trump’s Bullying: Divide to Rule

Consider the world that we lived in until the 2016 U.S. presidential elections.

Read the rest on Impakter, click here. Do let me know what you think!

Comments Off on Trump’s Hold on International Trade and Finance