“Fear”: Why Bob Woodward’s New Book is a Bombshell 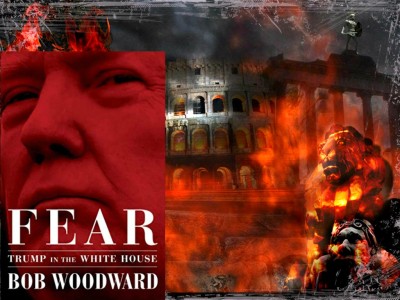 A key question is raging around Bob Woodward’s new book “Fear: Trump in the White House”, published by Simon & Schuster on September 11:

Did Bob Woodward wildly exaggerate and fabricate findings or is the Trump White House, and more importantly, the president himself, wildly dysfunctional?

An answer in partisan mode is no answer at all. Here, as a friendly outside observer (disclosure: I am European), I will try to clear up the issue.

The book, in a sober style, convincingly depicts an administration in the midst of a “nervous breakdown”, with aides running to contain damage. He reports this unforgettable comment from Reince Priebus: “When you put a snake and a rat and a falcon and a rabbit and a shark and a seal in a zoo without walls, things start getting nasty and bloody. That’s what happens.”

Among the revealing anecdotes:

This particular depiction of Trump’s White House found an unexpected echo –  really a confirmation – in the anonymous op-ed published by the New York Times just a few days before Woodward’s book came out, with the striking title: “I’m Part of the Resistance Inside the Trump Administration”. It is from a White House senior official and there are many theories as to who did it. The latest from  Ann Coulter claiming Jared Kushner did it. But at the time of writing, still no one really knows.

What is most unsettling about Trump is not so much his level of understanding about issues, bad as it is, but his systematic misperception of reality.

Comments Off on “Fear”: Why Bob Woodward’s New Book is a Bombshell