How to Stop Climate Change and Reverse Global Warming

My latest article on Impakter, hope you enjoy it. I tackle here what I consider the key issue of our time and these are great books, a must read, the authors make a truly convincing case: Thanks to people like them and their work, we should not despair, all is not lost in the fight against climate change….

So far, we’ve heard too much doom and gloom. And we still do, as attested by a recent Op-Ed from environmental activist Bill McKibben, the founder of 350.org.  Published on the New York Times last month, it has a scary title: The Planet Can’t Stand This Presidency, with a subtitle that doubles down on the message: “Trump is in charge at a critical moment for keeping climate change in check. We may never recover.” And the opening sentence is a scary reminder that coal pollution kills.

But it’s time to try a different approach. Let’s be positive: Global warming can be arrested, and better still, we may be able to reverse it. It will require a lot of effort and goodwill, but it can be done. And it won’t be costly, on the contrary, it will jump start a new age of prosperity and well being.

Both books tell us how to do it and their starting point is the same: The evidence is in, it really can be done. Thanks to them, we can start to entertain a rosy vision of our future, and that’s amazing. Furthermore, the two books are complementary and re-enforce each other, even though they are radically different in structure and the stories they tell.

A Hopeful Message on the Climate, from Michael Bloomberg and Carl Pope

The way forward suggested in Climate of Hope, co-written by  Michael Bloomberg and Carl Pope, may surprise a lot of people. It certainly surprised me, I hadn’t realized the extent to which cities play a major role in the climate change drama. 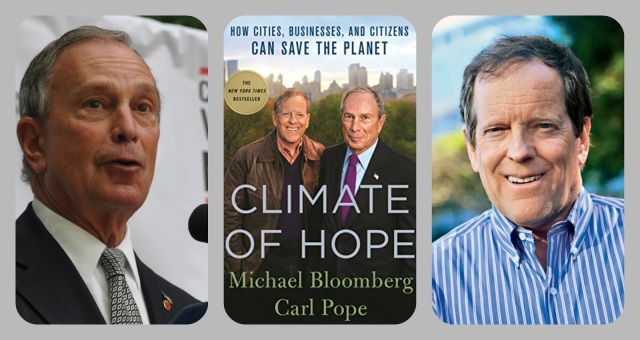 The other surprise is to see two completely different persons working as co-authors, an endeavor that requires deep understanding and mutual respect. Bloomberg is a billionaire, Carl Pope an environmentalist.

To read the rest and find out about Paul Hawken’s work and the role of Patricia Scotland, click here.