The big news from the G20 meeting that just closed in Buenos Aires is the 90-day truce in the U.S.-China trade war that has rattled financial markets and threatened global growth. The smaller news is that Trump did not pull the rug under this meeting the way he had done at the last G7 meeting in Canada.

The prospect of a no-statement Summit similar to the G7 debacle had looked very real. As it turned out, the show was very different from what everyone expected, largely thanks to the strong action of French diplomacy, spurred by Macron who wanted a G20 summit statement on his favorite issues, climate change, globalization and growth. But the G20 meeting confirmed the previous G20 in Germany (July 2017): American isolationism is back.

To understand what happened, it helps to take a step back and consider what the G20 is really all about – just like the G7, acting at the margin of the United Nations.

The G20, born of a G7 meeting of finance ministers and central bankers in 1999, is made up of the world’s 19 most important countries in terms of their GDP, plus the European Union. The two giant state members are the United States ($19.39 trillion) and China ($12.24 trillion). Since the G20 was founded, both superpowers have distanced themselves from the pack as most countries’ GDP flat-lined: 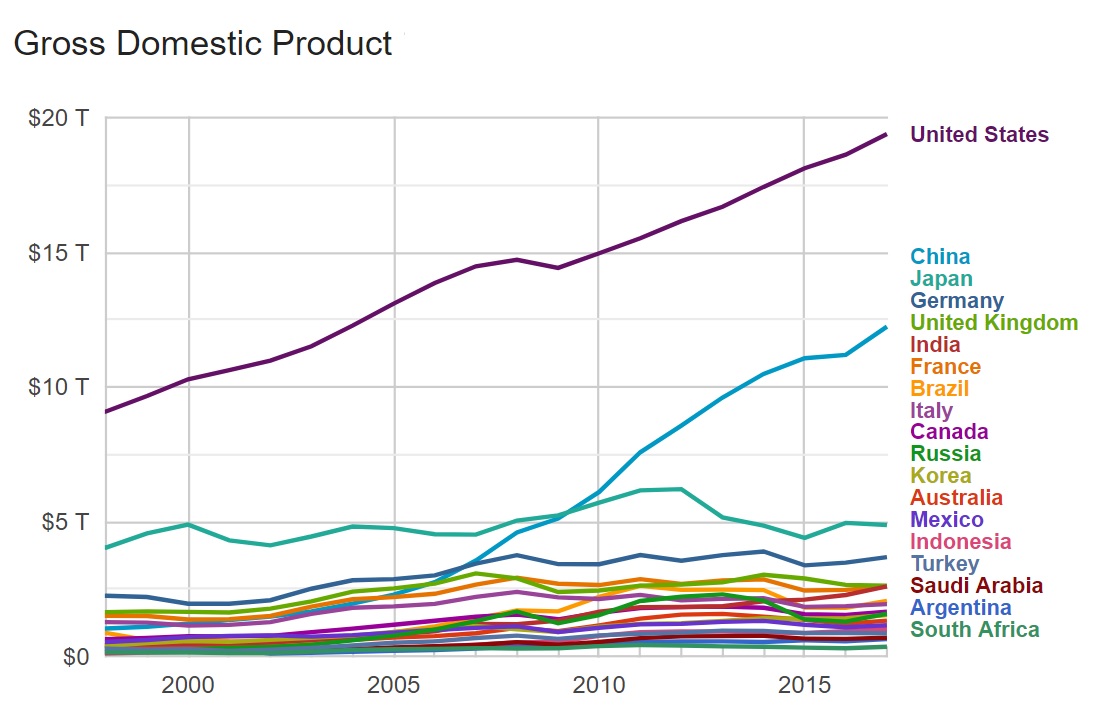 In spite of the limitations of GDP as an indicator (it doesn’t capture social progress),the diagram is a striking depiction of the varying impacts of globalization, with the U.S. and China the big winners, at the expense of the rest of the world. And it shows clearly how the U.S., contrary to what Trump says, has always been “great” with the 2008 Big Recession a mere blip on its growth rate.

And it didn’t help that Europe (as a region) showed up in disarray at the meeting: The UK struggling with Brexit and not getting the expected support from Trump; Russia embroiled in an escalating fight with Ukraine; Merkel on her way out and rumored to be aiming for the presidency of the European Council; Macron battling yellow vests protests that are now in their third week and devastated Paris last Saturday.

That leaves on the international scene the two superpowers, the US and China. Some even talk of the emergence of a G2. In a sense, when Trump dined with Xi and crafted a truce in their trade war, that was a G2 meeting.

But if one of the superpower – in this case, Trump’s America – chooses to isolate itself with trade wars and its America First agenda, then China is left free to interact with the rest of the world. Which is precisely what happened. Let’s take a closer look.

Comments Off on G20 Surprise Show