Populism in Europe: Can the New Left Defeat it?

Trump is the face of populism in America and the midterms have shown that a Democratic “blue wave” could stop and even defeat it. How about populism in Europe? After the traditional parties on the left collapsed and the center right à la Emmanuel Macron is stalling, political winds are turning. A New Left is rising, as recent elections in Germany have shown. Can this New Left defeat populism?

The next elections for the European Parliament in May 2019 will be the first big test for the New Left, with Europe as the prize. If populists win, the European Union and the dream of a United Europe will be badly broken as a retrograde “Europe of Nations” is installed. If the New Left wins, Europe will come out strengthened but it will have to undergo deep structural reform to bring its institutions closer to the people – and away from the private corporate interests that hold it hostage now.

The full extent of the growth of populism in Europe was  revealed this week in groundbreaking research conducted by the UK Guardian with inputs from leading political scientists and covering national elections in 31 European countries over two decades.

The findings are striking and show that populist votes have tripled since 1998, with one in four Europeans voting populist: 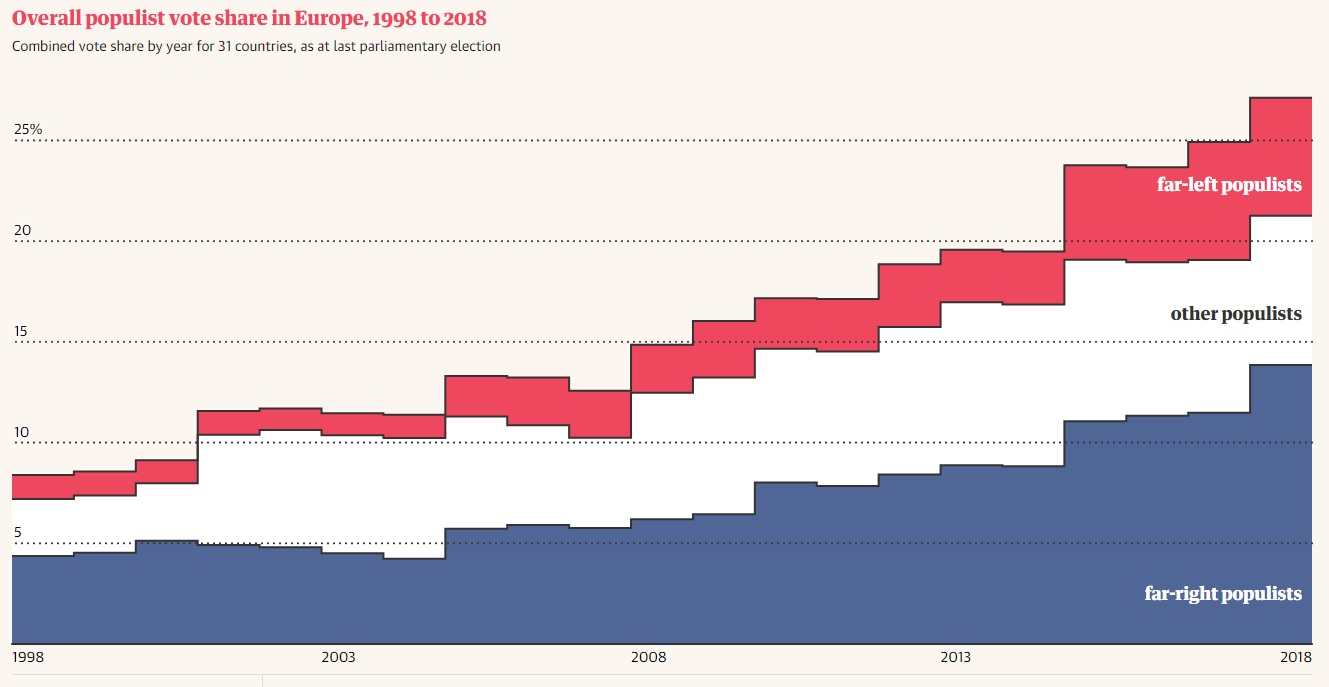 Twenty years ago, populists were rarely in government: Only 12.5 million Europeans lived in countries where at least one cabinet member was a populist. Today the figure has jumped to 172 million. Note, as shown in the graph above, the research counts equally populist parties on the right, left and middle, but the “irresistible rise of the far right and populism”, as many UK Guardian readers have commented, is the crux of the matter. Far right populists have nearly tripled their votes, from less than 5 percent in 1998 to some 14 percent in 2018.

The rise of extreme right populism has been accompanied by a deep crisis in center-left parties that have suffered a sharp drop in support in several countries across Europe, notably in Germany when the German Social Democrats retreated in the 2017 German federal elections; in France when the Socialist Party collapsed in the French presidential and legislative elections in 2017; likewise in Italy with the Democratic Party (PD) going to a historic minimum in Italy in 2018.

Center-left parties are currently part of only six EU governments out of the 28 member states, notably in Spain with Pedro Sanchez, leader of the Socialist Party (PSOE) who came to power in May 2018. However the PSOE is not the “New Left”. Founded in 1879, it is the oldest party in Spain and, historically, the one most often in power (most recently from 2004 to 2011 under Zapatero). Moreover Sanchez has a very thin margin (only 84 seats over 350) that constrains his ability to steer policies. Most analysts don’t expect him to finish his mandate (it ends in July 2020). As of now his government is “blocked” on the budget issue and new elections are probable.

Why Populism is Successful

There are four reasons:

Populism is on the march everywhere in Europe, notably in Eastern Europe where democracies are new. What is more surprising is to see populists leaders win power in West European countries where nobody expected them to be that successful:

…
Read the rest on Impakter, click here.
Let me know what you think, I love to hear from you!

Comments Off on Populism in Europe: Can the New Left Defeat it?