Why Populism is Dangerous: The False Migrant Crisis and The Real One

My latest article in the “Populism is Dangerous” series, just published on Impakter:

Populism is dangerous and puts public health and the economy at risk. But it is hard to resist. Populist politicians thrive on fake news: it is so much easier to fuel people’s emotions if you feed them fabricated news of imaginary crises. Particularly the so-called “migrant crisis”.

Italy is a harbinger of things to come in liberal democracies. It is where political change often happens first. The largest communist party in Europe outside the Soviet Union was in Italy; yet it was the first to go after the fall of the Berlin Wall. Berlusconi, a showy media tycoon who came to power in 1994 was a proto-Trump.

Previous articles have addressed the issue of austerity (here) and the public health crisis (here). Now we look at the false “migrant crisis” fabricated by populists. Yet  there is a real migrant crisis caused by the lack of assimilation of migrants already in Europe. Because the issue is not correctly diagnosed, no European country, or for that matter the U.S., has yet developed a set of policies to address it – with the exception of Sweden with its pro-active labor policies and Italy with its “Riace model”.

There is a migrant crisis for sure, but it’s not the one described by populists.

Exhibit A: Brexit. The UK voted to leave the European Union, panicked by the imagined threat of a migrant invasion and is now facing economic disaster.

In the photo: Brexit poster used by UKIP

Exhibit B: Trump, with his assault on migrants and Muslims. In view of the midterm elections, he’s upped the ante in an exceptional op-ed he wrote for USA Today on 12 October and a few days later, he re-opened his “caravan” scare on Twitter. 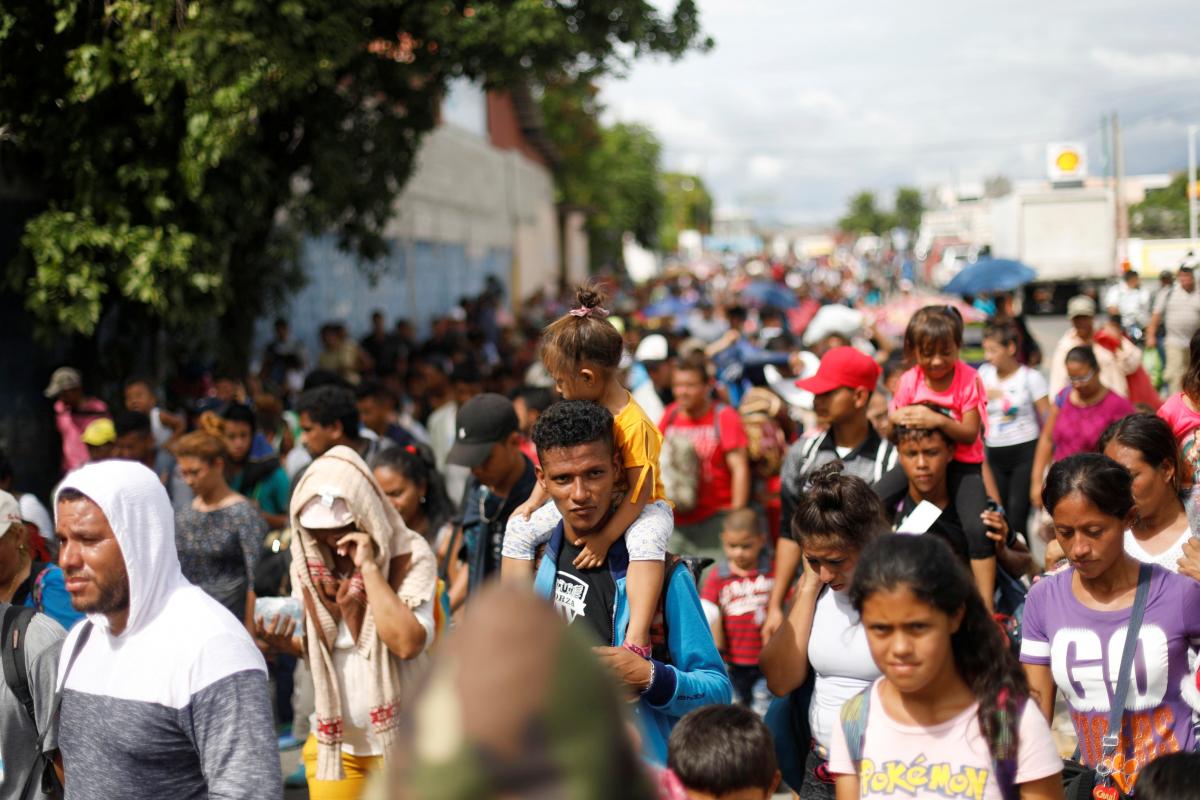 In the photo: Note how they move from right to left, just as in the UKIP Brexit poster, but there are children here.  These are Honduran migrants, part of a caravan trying to reach the U.S., during a leg of their travel in Chiquimula , Guatemala October 16, 2018.  Source: REUTERS/Edgard Carrido Reuters article and video

In a string of tweets, he threatened to cut off funding to the countries from where immigrants fled (Guatemala, Honduras and El Salvador) and demanded that Mexico put a stop to it. If it can’t, he announced he would use the military to shut the southern border. The most striking tweet is this one:

….The assault on our country at our Southern Border, including the Criminal elements and DRUGS pouring in, is far more important to me, as President, than Trade or the USMCA. Hopefully Mexico will stop this onslaught at their Northern Border. All Democrats fault for weak laws!

It encapsulates his favorite accusation against the opposition (“All Democrats fault for weak laws!”) but it puts forward an astonishing new notion: His trade wars, he says, are less important to him, even the newly achieved NAFTA that now goes by the name USMCA, U.S.-Mexico-Canada Agreement (it still awaits ratification). That’s remarkable, considering that he could claim USMCA as an achievement.

Like any good populist strategy, such technical considerations are set aside: the point is to divert public attention to fabricated issues – like “caravans” – that readily stir up emotions. Nothing is better than the true and tried recipe of evoking migrant invasions – just as was done by Brexit supporters. By comparison, trade is profoundly dull.  To whip emotions to a frenzy, there’s nothing like spreading fake news:  “A lot of money has been passing to people to come up to try and get to the border by Election Day,” Trump declared, without any evidence for this.

He immediately got support from the Republican party. U.S. Representative Michael McCaul, the Republican chairman of the House Homeland Security Committee and a member of the House Foreign Affairs Committee, said U.S. border security was a key election issue: “We have to secure that border once and for all,” he told Fox News in an interview.

Trump tweets of “criminal elements and DRUGS pouring in”, a vivid, scary image. But how bad is it really to allow migrants to enter the country?

Historically, America has been a beacon for migrants because of its “values”. Which is exactly what Europe also offers. And Italy in particular, a Catholic country that hosts the Leader of the Universal Church, the Pope.  What values are they exactly? A respect for human rights and human dignity. And for political refugees in particular, the protection provided by the 1951 Refugee Convention that sets out the rights of individuals who are granted asylum and the responsibilities of host countries.

However that welcoming environment changed in Italy well before the populists came to power in March 2018, as this PBS video makes clear:

The ground was laid out for the arrival of the populists. What we need to realize is that the austerity policies imposed on Europe since the Greek debt crisis exploded in 2010 are the root cause of the problem.

Countries that are impoverished by austerity policies  – Greece lost half its GDP, Italy is stagnant and its youth suffers from one of the highest unemployment rates in Europe  – are easy prey to populist anti-immigration policies. Blaming foreigners for one’s woes is far easier and more satisfactory than trying to sort out the problem and come to a constructive solution.

Europeans have very negative views of migrants, and the countries with the most negative views (for example, Hungary) are those that close their borders, build walls and refuse to cooperate with European Union members:

Comments Off on Why Populism is Dangerous: The False Migrant Crisis and The Real One