War on Migrants: Is Europe the Loser?

Just published this article about the (depressing) results of Swedish elections – once again, the extreme neo-nazi right has scored a win – and here’s why we should worry. The article opens on the results of the elections and goes on to explore the consequences for  liberal democracies in Europe and America:

This Sunday 9 September, all eyes were on Sweden, where elections for a new parliament were taking place and where populists, playing on widespread and rising hostility to migrants, seemed set to win a decisive victory. And they did. Almost one in five Swedish people voted for the Swedish Democrats (SD), the neo-nazi, anti-immigration party, giving it 17.6% of the votes:

Why has Sweden become the battlefield to watch? One of the world’s richest economies, it has drawn proportionately more migrants than most countries in Europe, along with Germany, when in 2015 Chancellor Merkel famously opened the doors to a “million immigrants”. And, in spite of an excellent “model” for integrating migrants in its economy  and statistical “proof” that migrants have contributed actively to the rise in Swedish GNP – more about this below – people in Sweden have nevertheless been drawn to the siren songs of the populists. Just as they have in America, with Trump’s fight against immigration.

While the anti-immigration SD did not gain the 20 to 25 percent predicted by some polls before the elections, it is still a sizeable win that spells gridlock in Swedish politics.

Though early news indicate that the Swedish system of two blocks (left and right, each with around 40% of the votes) that has dominated Swedish politics over decades could be coming to an end. The outgoing Prime Minister Stefan Lovfen indicated that he would keep governing and would open to the center-right block. His party the Social Democrats, while losing some ground (it’s the worst result since 1908) still came out first at 28.3%. The problem is that the center-right leader Ulf Kristersson strongly feels he should be the one forming the new government.

Can this gridlock be resolved by the SD? The SD leader Jimmie Åkesson sees himself as a kingmaker. But other parties see him as definitely dangerous and don’t want to talk to him. Small wonder: SD has proposed a “Swexit” referendum to take Sweden out of the European Union and has vowed to end Sweden’s asylum policies.

The SD’s policies resonate in Swedish society, shaken by the flows of migrants that have strained housing, health care and welfare services. Public services came under pressure in 2015 when 163,000 asylum seekers were let in, proportionately the highest number in Europe in relation to the population. And the SD call resonates particularly in rural areas where industries and public services have been cut back. The party has repeatedly tried to link a rise in violence to immigrants, although official figures show no link. 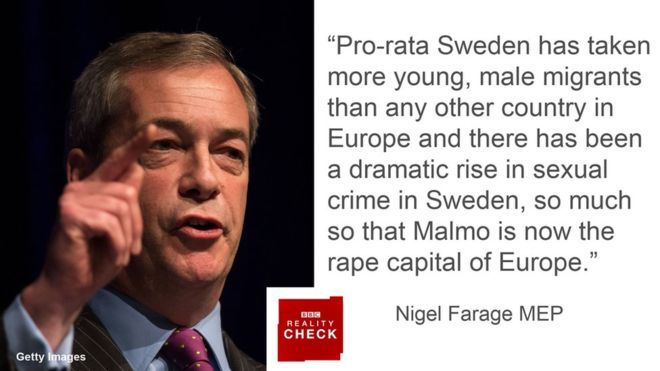 In the photo: Comment made by former UKIP leader Nigel Farage on LBC radio on Monday 20 February, when he discussed the recent comments by US President Donald Trump about terrorism in Sweden. Source: BBC

Malmo, in spite of Nigel Farage’s claims, is not the rape capital of Europe. Rate of reported rapes are high in Sweden because of the way Swedish law is applied; but the rate in Malmo, and other urban centers, has not dramatically risen in recent years and has in fact declined from its peak in 2010, before the recent large increases in refugees. In short, there is not way to link

But the problem is bigger than Sweden. While such a win certainly signals another tightening of the screw on migrant inflows, more importantly, it threatens Europe’s future and the liberal values it stands for. In short, it marks a further rise in xenophobic populism.

Xenophobia is Back in Europe

It is back in Europe with a vengeance. Because that is the right term for this type of populism, rooted in the hatred of the other. The term, derived from Greek, has deep roots in History. Indeed, the ancient Greeks were the first to give it a name. They called foreigners with the derogatory term “barbarian” and saw them as only fit to be slaves.

This formula – ascribing a rise in violence and a decrease in public services to immigrants –  is exactly the policy of all populists across Europe, from Italy’s Matteo Salvini, Austria’s Sebastian Kurz, Poland’s Jaroslaw Kaczynski to Hungary’s Viktor Orban – spurred on by Steve Bannon who’s working hard to pull together all the European populists for a big win at the elections for the European Parliament in May 2019.

The populists’ aim is simple enough: kick the foreigners out. They won’t hear of managing the situation and integrating whoever can prove that they are able to work and contribute to national wealth. Integration is a dirty word, something they won’t even discuss.

The Swedish elections are a litmus test for liberal, democratic values, a test that is causing fear across Europe and should equally worry Americans. Because a strong win for populists in Sweden does two things:

The term “migrants wars” is bandied about as if flows of migrants were still on the rise, while they have in fact sharply fallen since the high in 2015. And that is the biggest piece of fake news that populists bank on.

A quick look at the facts is needed to dispel any doubts that migrant flows are rising.

The Migrant Crisis that Doesn’t Exist

Comments Off on War on Migrants: Is Europe the Loser?