I don’t know about you but I’m suffering from Trump fatigue. He’s just too much – and tweeting too much. So this week I looked at another issue (which Trump is no doubt making worse): climate change. Just published on Impakter, here’s the beginning:

Will climate change and global warming eradicate humans? This summer, the worst scorcher to date, has become a season for panic: wildfires across the Western United States, Greece and Sweden, record temperatures in China, unprecedented floods in India and Japan, a surge in heat waves in urban areas that are predicted to get worse by 2080, killing up to four times as many people as they do today.

With Trump’s America leading the charge, pulling out of the Paris Climate Agreement and pulling down every environmental protection rule, it looks like the battle for Earth and our survival is lost.

After all, America is still the largest industrial country in the world and a major polluter, on par with China. And while China “got the message” and is at least trying (though not always successfully) to curb its climate-destructive ways, America is not.

True, single American states, like California and a few others, as well as big cities like New York and San Francisco that have joined a world alliance of big C-40 cities, are trying their best to counter climate armageddon.

But that’s not enough. The problem is Washington and Trump. American climate deniers are having a field day, and they are winning.

Earth lovers and tree huggers are fighting back. The New York Times this week came up with an extraordinary piece of long journalism. In a single-theme issue of its Magazine, focused on climate change, it published an authoritative article with the striking title: Losing the Earth: The Decade We Almost Stopped Climate Change.

The article is both a mesmerizing and heart-breaking read. It helps dispel the cultural amnesia we suffer from too often, the idea that the climate change fight is something recent. Or that the fuel industry wasn’t aware of the dangers of fuel emissions – it was well aware of them, as far back as the 1950s. And at first, it had even tried to play along and prepare for an alternative green energy future: Exxon financed honest, independent research…until it didn’t.

The article was put together over 18 months with support from the Pulitzer Center on crisis reporting. It was written by author Nathaniel Rich, whose apocalyptic novel Odds Against Tomorrow was an instant bestseller when it came out in 2013. 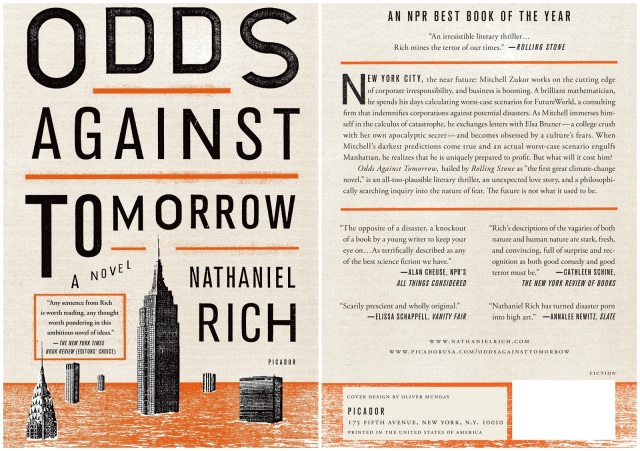 That book made Rich one of the young and rising stars of climate fiction, a new genre that went viral with the new century. This is a novel I read with great pleasure when it came out, a not-to-be-missed thriller with unexpected twists and turns that will bring home what it feels like when your town is flooded (in this case, New York).

The article is illustrated with stunning video and photo work from award-winning photographer George Steinmetz who specializes in aerial imagery.

The online version starts off with a long video shot of melting snow and the stark words:

“30 years ago we had a chance to save the planet.”

Comments Off on Climate Change: Too Late? Here’s Why There’s Hope…